The newly revised edition is now available in paperback at a discounted price in the U.S. and Europe! 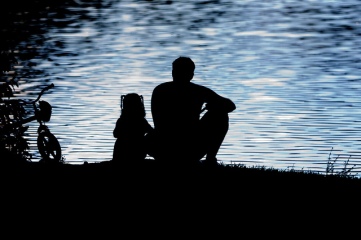 Imagine a guardian angel busily wandering the world invisibly, specifically looking for your soul to protect. The remainder of your team of ethereal assistants is short-staffed, attending a harp-playing workshop over on Cloud Nine. Down below you see two people. One doing much of nothing. The other is effectively putting up a sign that reads, “I am here for you, doing all that I can and whatever it takes to get you through.”

Each day of my life, my late great father Lorenzo, plays the part of that consistent heavenly helper. He is physically gone but spiritually resides in my heart, in my mind, and on the clouds that govern my space. The mere tranquil approach in which he spoke to me fostered the very acquiescent side of my character. As a child, it was unreserved love that I saw in him. I watched him diligently do so many things.

I watched him mow the lawn when the grass grew too high for me to stand in. I watched him tidy up the house when my mother was too ill to clean it. At five years old, I watched him prepare freshly brewed coffee in the early hours of the morning while preparing for work [and frequently joined him for a cup]. I watched him drive the city bus and chaperone my siblings and I around after his daily tour of duty ended. I watched him set booby traps for the black widow spiders that took residence once in a while in our basement. I watched him change the dirty oil in our 1969 green dodge station wagon. I watched him ride his ten-speed bicycle down the Boulevard and back again. I watched him greet every single person with a warm smile and a friendly hello. I watched him love my mother effortlessly.

I watched my father be the role model dad every kid on the block hoped for, and the husband I am certain every woman in those times – and these – could only wish for. But he wasn’t just my father. He was liked by a country and loved by a community. As I became older, I realized that my father was a true service man, not just a combatant of the United States Army but a server of the people. He was a man with a high level of integrity and genuine compassion for others. I intrinsically looked up to him for protection and guidance and he was an unwavering example of loyalty to me.

Regrettably at the age of eight, I lost my father to systemic lupus. The mere thought of him going on without me and me staying behind without him was enough to shatter every dream I had of everything. During the years that followed, I did not quite understand that as I would grow older, I would not have his physical presence and security, the warmth of his smile, the embrace of his hugs, or the wisdom of his astuteness to console me. But I would have his love forever. Through him, I was bestowed a spirit of humility and inspiration to share with others.

He was my father, my leader, my King.

Of all the duties and responsibilities in the universe, fatherhood is the most important role a man can ever employ to his family. Modern day society often defines father as a “sperm donor” and a dad as a “provider.” The way I see it, being a good provider while maintaining a level of decency, integrity, and standards is what identifies a man as an actual father. Further, during the course of my upbringing I was taught that addressing my father as “dad” and not as “father” was inappropriate and disrespectful. Preference to some while improper to others, calling him “dad” didn’t seem to make much difference to me. He was my father, it was evident – and he was there.

When a father understands his role, the responsibility he has to his family, the concept of give-and-take, how to employ honesty, create balance, and exemplify unconditional love, he has assembled all of the healthy ingredients for making a family unit work.

In his 1986 bestseller Fatherhood, Bill Cosby’s crafty account illustrates, “The strong father role (which doesn’t have to be associated with beatings and remoteness) is not to be totally discounted as part of the recipe for raising healthy children, if it is executed skillfully and given in measured doses at the most appropriate of times.”

Though mothers occupy this strong-role as well, there is no substitute for the role that an accountable and loving father can give. Amazingly, my father never had to raise his voice – or a belt to our little bottoms. His humble tone and amorous approach was enough to set the record straight. We respected him and we loved him for being our dad.

The true experience of fatherhood begins long before the birth of his first child. Each stage, beginning with infant, toddler, preschool, preteen, teenager to adulthood, presents new and challenging developments and issues for the male gender to address. His connectivity to his mother at birth, the intimacy he holds with his father, his interaction with the female gender throughout grade school into young adulthood, his emotional, psychological, and physical adjustments during his career, to the position he will someday assume as husband – all play an integral role in what and who he will become as a dad.

The beauty of the experience of parenthood emerges when fathers and mothers alike, discover creative and sustainable ways to accomplish this “mystical task” successfully.  Most of us know that being a parent extends far beyond a 9 to 5 job. It has no measure of time or attachment, no six chapter manual with highlights on the do’s and don’ts, and no right single approach. It is a lifetime gift of accountability, commitment, trustworthiness, leadership and benevolence. It is a responsibility for the resilient to lead; the resistant to learn.

That is not to say we won’t stumble or make mistakes along the way. The significance, I believe, is in finding the strength to get back up, pick up the pieces, and utilize the mishaps as tools for growth – for both our children and ourselves. While the harmony and durability of many parental unions is often challenged and concluded, walking away from the responsibility of parenthood is never an option for someone walking out of a divorce.

In addition to every blissful day of remembrance, January 26th of each year is a day in which I take some time to reflect. I celebrate the life of the messenger I always knew as my dad, my guardian, my guide, my gift. Lorenzo is my angel. Through his spirit, I am reassured in knowing that I will always have a man to love.

Weekly Affirmation: I am worthy.