May is International Civility Awareness Month

“We are coming to the point in this country where doing what is right is merging with what we need to do to save our national skins.”  ~ Marian Wright Edelman

“Que sera sera, whatever will be – will be; the future’s not ours to see…”

The lyrics of this classic Doris Day song often encourage me to want to see more, though the transparent question of every day now is, “what are we seeing?”

I did not want to believe my eyes headed home from the office one day and while sitting on a crowded train with standing room only. Occupying two seats in three rows ahead of me was a man (not a gentleman) with his baggage, while a pregnant woman stood with a toddler during most of the ride. I thought, surely this man is going to stop reading his newspaper and give his seat to this expecting mother. But that did not happen at all. After minutes of observation, another passenger and I simultaneously stood up to accommodate the pregnant woman aboard. Needless to say, I was visibly disturbed for the remainder of the commute.

Often, I am disturbed by the public behaviors of people everywhere I go, from the lack of basic manners to the lack of fashion countenance. Passing through environments where vulgar language is exchanged or the disclosure of ‘uncensored’ body parts are displayed, indeed, is no sunny walk in the park for me. And so it seems, the more modern we become with technology, verbal exchange, and fashion too, the more we adapt to the negligence of exercising civility, genuine concern, and consciousness.

As the song moves along…“The future is not ours to see.”

But in fact, it is. It is ours to envision, assimilate, and amend. The manifestation of self-awareness on an individual level will awaken the necessity for ‘universal’ respect.

“Civility is about more than just politeness, although politeness is a necessary first step. It is about disagreeing without disrespect, seeking common ground as a starting point for dialogue about differences, listening past one’s preconceptions, and teaching others to do the same. Civility is the hard work of staying present even with those with whom we have deep-rooted and fierce disagreements. It is political in the sense that it is a necessary prerequisite for civic action. But it is political, too, in the sense that it is about negotiating interpersonal power such that everyone’s voice is heard, and nobody’s is ignored.” (Tomas Spath and Cassandra Dahnke, Founders of the Institute for Civility in Government)

What are painfully obvious are the continual immoral acts of incivility around our world. Much of the society in which we live has settled – and to a large degree – conformed to relentless acts of character assassination, cross identity differences, mass aggression, and the extreme epidemic of rudeness. The lack of civility and human rights liberties continue to run the gamut around the globe, for there is no corner of the world that has been ‘untouched’.

On one episode of Bravo TV’s The Real Housewives of Atlanta Reunion two cast members [Kenya Moore and Porsha Williams] battled it out in a relentless brawl in which Kenya Moore ‘ignited’ the cat-fight by screaming and waving a scepter in Porsha Williams face. I can assume that many fans viewed this occurrence as some form of quality discussion, but what began as evening of entertainment quickly ended in a physical attack (and arrest) between the two.

In the year of 2010, a series of civic atrocities occurred. A student in Lafayette, Georgia pulled an unloaded firearm on another student in a dispute over a Twinkie cake. [Lafayette, Georgia News] At South Hadley High School in Western Massachusetts, a 15 year-old girl committed suicide after intense stalking, name calling, harassment, threatened physical abuse and relentless bullying from other high school “mean girls” who even after her death, did not demonstrate any regret or remorse for their actions. Instead, they used Facebook to mock her death. [The Boston Globe] A 40 year-old Charter school teacher in Houston, Texas was fired and arrested for attacking and repeatedly hitting, kicking, then banging a 13 year-old pupils head into the wall of a school bathroom – an incident where the remainder of the teachers and many of the students stood around and watched. In another city, an angry man missed a flight connection and threw his suitcase at an eight-month pregnant airline employee. [Dailymail.com] And the beat goes on.

The tragic reports of incivility continue to rise, covering the pages of newspapers and magazines across the world. We bear witness to many of these behaviors in countless numbers from public figures to everyday folks alike. Rudeness, lack of human dignity, vulgar language, character assassination, and misdemeanors have reached an all-time high, while charitable giving and acts of philanthropy continuously decline. If we’re going to continue to wander around in a state of sheer unconsciousness and assume that ‘IT’ is all out of our control and the only thing we can do is view it from afar and accept whatever happens – then we really can’t seize any opportunity for powerful transition and positive change. Now can we?

A sense of morality fosters an act of civility which internally guides us in how we respond in and around the world. The end result becomes transparent in how we view ourselves, our bodies, our minds – and others. When we honor and respect ourselves, we honor and respect others in the same manner. Our self-awareness is heightened and we begin to heal the world by resigning our ego, respecting multiculturalism, exercising civility, practicing etiquette and honoring the human rights of others. True civility takes into account the humanity of other people with whom we are engaged. It challenges us to embrace change, make connectivity, and cultivate accountability because we have certain moral responsibilities to one another.

“The day the power of love overrules the love of power, the world will know peace.” – Mahatma Gandhi

As an etiquette and life skills consultant, I have witnessed the decline of basic manners in the world from road courtesy to classroom chaos. But I also see the rewards in making youth aware of the need for civility. From time to time, I wonder if my work gives meaning – if anyone’s child is really paying attention in my class. I cherish the opportunities I have been afforded to engage with youth of both genders and from every walk of life. Be they from an under-privileged community or the most poised culture, something remarkable happens. Once the season of etiquette workshops has ended, a student, somewhere, will return to express their personal gratitude for how my teaching has made a difference in their life, inspired them to excel, or simply helped them to consider a more adequate way of thinking, behaving or speaking. They are grateful because I believed in them…but more importantly – because now, they can believe in themselves. While I take no credit for this intervention, I do take a moment to be thankful and clear on the ‘position’ I hold.

We are all travelers on the same spaceship of life. The earth beneath our feet is our Earth. It belongs to all of us. The air we breathe is common property too. Yet we spend so much time drawing distinctions, defending divisions, and delineating differences from countries to culture to color. We go bananas for borders and boundaries…“That’s my property – that’s yours. This is my land – you keep out!”

An act of true civility requires compromise, collaboration, connection and real change. We need to build bridges, not walls in our communities. And we need to concoct an ingredient that is civil, peaceful, and promising. Just because others may not employ the best of pleasantries does not excuse us of being courteous and aware. We can rectify the acts of incivility in our world by starting with ourselves. We can change. We can serve as better examples for the young and seek advice from the elders who possess infinite wisdom. We can modify the way we treat each other because civility begins –and ends – within each of us.

Yes, the future is ours to see – and to save.

Weekly Affirmation: I am living in the spirit of accountability. 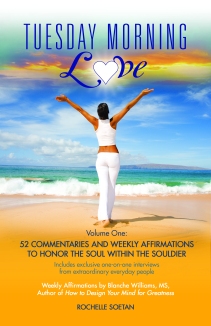 Tuesday Morning Love: 52 Commentaries and Weekly Affirmations to Honor the Soul Within the Souldier (edited edition) will soon again be available in eBook and Paperback. We regret the delay and thank you for your patience and continued support.