Silence speaks volumes. Often, it is in the silence that the loudest noise is extracted. While matters of the mind may be made verbal, matters of the heart can remain subdued. These matters linger in the shadows of the subconscious, masking and hiding with not only an alternative, but also an agenda. The heart and the mind matter – and they ultimately design the foundation of what we are.

Human relationships can be complicated. A big part of this complication begins within us. When we are uncomfortable within ourselves, we find it difficult to communicate with the people whose opinions we value most – or for whom our feelings are the strongest. Communicating is one task; understanding is another. When we are attentive, we are able to tune in to the deeply rooted matters and unspoken quandary that is taking place in the mind and heart, both within us and our companions.

African American partners share particular daily oppositions. Some of these include economic, social, educational, and even psychological challenges. Many of these run the gamut from competing in the corporate world to competing against each other. But many African American partnerships value love, honor, esteem and truth as well. As individuals, we can earnestly lack the ability to communicate, and thus, fear change, responsibility, and sometimes, truth. But the relationships we cherish not only show us truth about who we are, but also provide a pillar on which we can depend on nourishment, restoration, healing and love.

When we are silent about things that matter, we keep ourselves in the dark. Our ability to connect to one another becomes immobile and the result of fear forces us to withhold the troublesome issues that need to be explored and exposed. Silence does not unite us as couples, rather, it divides us as communities. And though we are able to acknowledge the verbal absence of a single individual, we cannot be sure of what that volume contains.

Within our partnerships, we must learn to give priority to those things that will sustain us: trust, clarity, patience, kindness, self-control, and unconditional love. These are the qualities that create long-lasting, loving unions. Some myths about black love portray that black relationships and marriages don’t last; that they only consists of sex and are comprised of arguments, hardship, pain, and troublesome mischief. Or that they simply do not exist at all.

“What is astonishing under these circumstances,” as one historian noted, “is not that some Black couples have problems, but that so many Black couples still love and give. These couples are all around us and we can learn from them and from Black history on how to identify – and defy – the biggest lies about Black partnerships.” Source: Ebony Magazine, March 2002

Today, many phenomenal African American partnerships like President Barack & Michelle Obama, Denzel & Pauletta Washington, Will Smith & Jada Pinkett-Smith, David & Tamela Mann, and Flex Washington & Shanice Wilson share the values and success of African American partnerships in history that stood and continue to stand the test of time. Dr. Martin Luther King, Jr. & Mrs. Coretta Scott King provided us with a road map for how to love, how to partner, and how to support one another.

On October 18, 1992, Barack Hussain Obama Jr. wed Michelle LaVaughn Robinson at the Trinity United Church of Christ in Chicago, Illinois. President Barack (a Stevie Wonder fan) deemed their wedding song “You and I”. 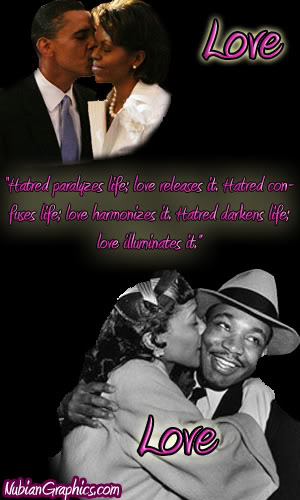 Today, their love for one another remains to be a true reflection of their long-lasting devotion and flight. Michelle Obama, a graduate of Harvard Law School and practicing Lawyer, first met President Barack at Sidley Austin, a law firm where they both worked and were among very few African Americans. Their relationship began with a business lunch, followed by a community organization meeting, where he first impressed her. After Barack left his stimulating effects on Michelle and over a period of one month, she agreed to a first date. They went to the art institute, had a quaint lunch at an outdoor café, talked, walked, talked some more, had a cocktail on the 99th floor of the John Hancock building – then ventured to see the Spike Lee movie “Do the Right Thing.” Hindsight, I suppose they did!

Black love is beautiful and the Obama’s embody this kind of love in its entirety. They show us that black male and female relationships not only can work, but also are realistic and significant to culture.

President Barack Obama wrote in his second book “The Audacity of Hope: Thoughts on Reclaiming the American Dream”, “Tired and stressed, we had little time for conversation, much less romance.” Nonetheless, after more than 23 years of marriage, they continue to schedule date nights.

Love is essential. Love is necessary. It resides at the core of our being. It is the glue that bonds us as individuals, partners, and as a society.

Michelle Obama wrote on love: “Cute’s good. But cute only lasts for so long and then it’s, “Who are you as a person?” Don’t look at the bankbook or the title. Look at the heart. Look at the soul. When you’re dating a man, you should always feel good…You shouldn’t be in a relationship with somebody who doesn’t make you completely happy and make you feel whole.” [Source: Michael Y. Park, Michelle Obama’s Secrets to Finding a Great Guy, People.com 2011]

Copyright © 2009-2016. All rights reserved. Tuesday Morning Love is a trademark of Wind of Light, LLC