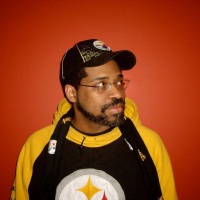 First of April-
Maybe this cute cashier
has no boyfriend.

Spring loneliness-
The wind pushes an empty
box of Newports.

April puddles-
Even this atheist
must take a leap.

Monday Morning-
Even my reality checks
are bouncing.

At the corner
A boy with his pants sagging-
Half moon.

Hair bun bobbing
as she slowly disappears-
The setting sun.

Fiftieth birthday-
Looking up a word
I used to know

At the table’s
padded edge,
I study her face
as the cards,
fifty-two,
wait to reveal
our future,
oblivious to
the weight,
of placed wagers.
Their rhythmic chorus-
riffling, cutting,
entering and exiting
a dovetailing desire,
an unsettling sound,
one that cannot hint or
predict the
deck’s secret details,
no tableside sign
of awaited outcomes.
I close my eyes
and imagine,
listen for the whisper
and swoosh
of a river
beyond the Turn.
This is chaos,
the run
of randomness.
Will a large Spade
bury what remains
of my hand?
Only one gets
what they want.
The last card
appears.
And here,
where hearts
pump their deepest,
her skin that once
seemed silent
now bursts
into radiant bloom.

Joel Dias-Porter (aka DJ Renegade) was born and raised in Pittsburgh, PA, and is a former professional DJ.

In 1995, He received the Furious Flower “Emerging Poet Award.” Performances include the Today Show, the documentary SlamNation, on BET, and in the feature film Slam.  A Cave Canem fellow and the father of a young son, he has a CD of jazz and poetry entitled ‘LibationSong’.  Joel’s poems can be explored at http://www.renegadesblog.blogspot.com